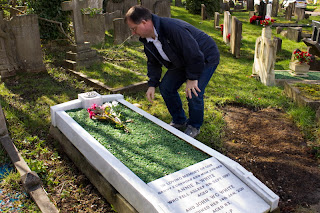 Last weekend Dawn and I had a ride up to St Pancras and Islington Cemetery to visit my parents' grave for Mother's Day.  Even though we lost Mum over fifteen years ago, it was still an emotional occasion.  Visiting the cemetery now reminds me that not only is Mum no longer with us, but also that Dad and my eldest brother are no longer around either.

We only lost Dad and George in the last eighteen months and it's still hard to accept that they are both gone.   We had always worried what would happen to George when it was Dad's time. We never dreamt that he would go first.  I'm also sure that his heart attack also played a part in Dad's time too.  I think he stayed around to be there for George and with George gone, Dad felt he could go too. He hadn't been well for quite a while and went downhill pretty quickly after George was gone.
Our visit to the cemetery also gave me a chance to clean up my great-grandparents' grave too. I'd found it on my previous visit and it was pretty overgrown.  Clearing away the moss, weeds and even a few branches from trees close by made me think about our mortality and those we leave behind.   Over the last 15 years (while I have been in England), I have made a point of paying my respects on special occasions like birthdays, Mother's and Father's Days and anniversaries.  But what about my great grandparents?  How did their grave get so overgrown?  They had three sons who each had children.  My grandfather being one of them.  And they had grandchildren, too.

But at least there was a memorial stone for them.
My grandparents (who passed away in 1936 and 1957 respectively) were both buried without a memorial stone. When I first visited their grave in the 80s , it came as a shock to stand over their last resting place with no visible sign that they were either buried there or had existed.  Thankfully, as their grandson, I was able to take ownership of the grave and get a small stone laid.  There was a place for Dad too, but he bought a grave for him and mum.  So when George died, it was decided to lay him to rest there and we got a new stone like Mum's.
But spending time around these memorial stones made me think about our future.  And not only ours, but others like us.  There were hundreds of graves with memorial stones completely overgrown having not been visited by loved ones in years, if not decades.  Which I found extremely disturbing.  How many generations must past before these memorials to our descendants become neglected? Visiting my parents' grave gives me comfort, but what will happen when I am no longer around?

And what will happen to me?  I think I'll get cremated and have my ashes spread on the beach at Hayle.  This means that I'll have no overgrown memorial stone.  No grave for family to grieve over either.  I just hope this is the way in the future.  So I'd better lose some weight, get some exercise in and make sure that I look after myself more than I have been of late.
Posted by PJ's Veggie Recipes at 8:22 pm